The earliest mention of a Protestant presence in Ypres dates back to the early years of the Reformation, between 1526 till 1529. Protestant thought disseminated through the transnational connections of the Augustinian order, of which Luther had been a member. The prior of the Augustinian monastery in Antwerp, Jacob Spreng, otherwise known by his Latinized name Praepositus, originally hailed from Ypres and became interested in Luther’s new ideas. Spreng was forced to retract his views, and was sent to Ypres to shed his “toxic ideas”, but instead he continued to preach in and around Ypres.

While the earliest Protestants were Lutherans, Calvinists and Anabaptists soon arrived in the area around Ypres. Repression gradually increased, and the first known martyr in Ypres was Martin Peetrey, a cobbler’s apprentice, who was burned at the stake. Between 1547 and 1595, 116 Protestant martyrs were executed in Ypres.

In April 1566, Margaret of Parma, the governor of the Low Countries, decided to halt the persecution of the increasingly visible Protestants. Many large-scale open air gatherings were held in the areas surrounding Ypres. The Iconoclastic Fury of 1566, a wave of destruction that spread throughout the Low Countries, originated close to Ypres. On August 15, 1565, the Iconoclasts reached Ypres and demolished the interiors of various churches and monasteries. Between 1578 and 1584, Ypres formally became a Protestant city, and the Protestant liturgy was administered in the Cathedral and three parish churches. Yet the tide turned quickly and the army of Alexander Farnese, Duke of Parma, besieged Ypres in September 1583 and cut off all food supplies. Ypres surrendered in April 1584, and the fall of Ypres signified the end of a Protestant presence for almost a century: all remaining Calvinists fled or pretended to be Catholic.

Between 1677 and 1762, the Protestant church was re-established and no less than twenty ministers served the congregation. In the nineteenth century, an independent congregation did not exist in Ypres and not much is known about individual Protestants.

The current Protestant Church in Ypres dates back to the reconstruction period after World War I, when Methodist missionaries from the United States brought both material relief and spiritual reinvigoration to this war-torn area. In the 1950s and 1960s, the Methodists were at the forefront of the emerging ecumenical movement, which resulted in the merger of various Protestants denominations in 1969 and 1979.

Who we are today

The current day congregation is small but vibrant, with a strong interest in ecumenism, advocating for peace and reconciliation, and promoting inclusivity. Our church services are characterized by a careful blending of traditional liturgical forms and contemporary influences. We believe in the power of the word and in the power of community. We hope that in every sermon or liturgy all visitors hear something new or challenging that they can use in their daily life. Likewise, we hope that nobody leaves church without having had a good conversation or a good laugh with one of their fellow visitors.

You are very welcome to visit our church service on Sunday Morning at 10.00. The service will be conducted entirely in Dutch, save for the occasional song in English. We will not be able to provide a full translation in English, but if you announce your visit beforehand, we will try to provide you with a handout of the Scripture readings and a short description of the service. 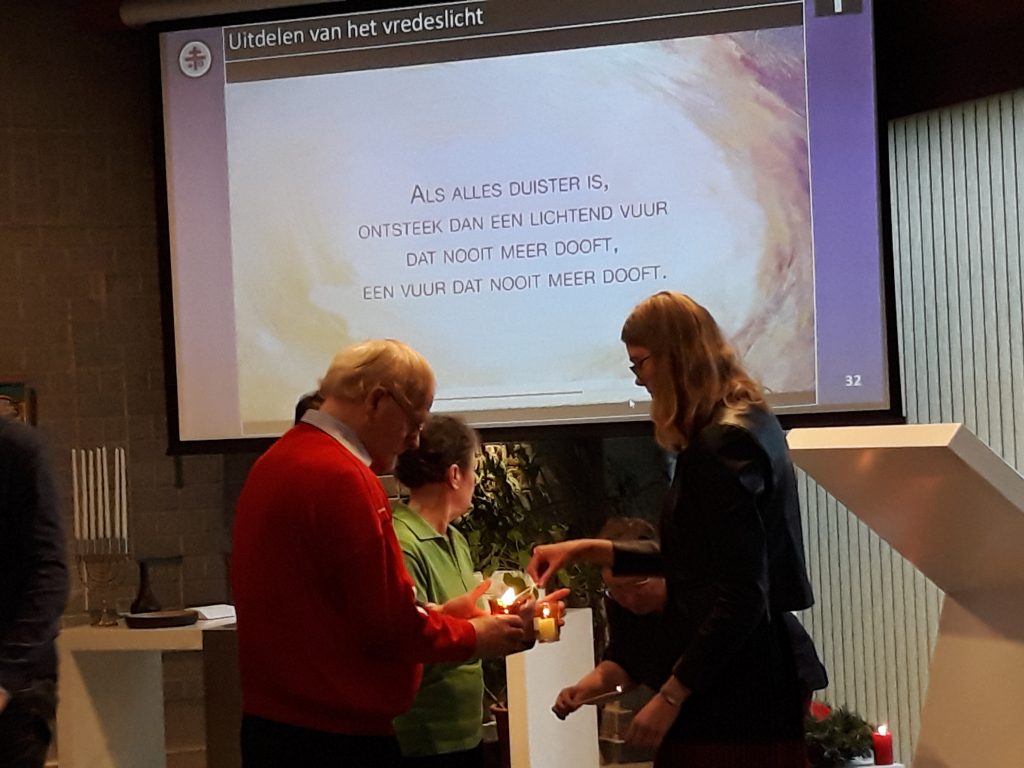